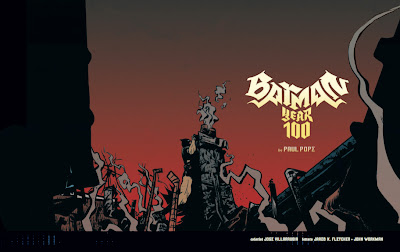 The collected trade paperback edition of BATMAN YEAR 100 will be in stores January 17th 2007. We (meaning myself and asst. art director Amelia Grohman--with a little help from Chris Pitzer of Adhouse Books--) put the cover and interior designs to bed last week. The book contains a lot of extra supplimental material not featured in the original series--something like 30 pages worth of stuff. Along with the full Year 100 story and all the "Batman sightings" police and media reports, there is the obligatory cover gallery showcasing all the original series covers. We're also running the 18 page "Berlin Batman" story I did in 1997, warts and all, which was not only my first Batman story, it was also my first big job in mainstream American comics.

Finally, there is a special "making of.." section showing some of the prep sketches I did for the costume design (especially stuff for the utility belt). If we had the room, I'd have liked to add further sections for Batman's motorcycle and the various BATMAN logos RINZEN and I did before finding one that worked, but alas.
Posted by pulphope at 12/06/2006 02:30:00 PM