(THE PROBLEM) IN KNOSSOS 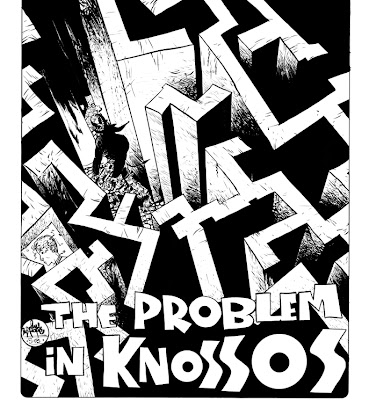 Black and white line art for the first page of my story THE PROBLEM IN KNOSSOS, which ran in SOLO #3 from DC Comics. At the last minute, Walt Simonson saw this page lying on the desk of Mark Chiarello's office and pointed out I had misspelled the word "Knossos". I spelled it "Knosos". Like the cops in Poe's "The Purloined Letter", I had overlooked it and so did all the proofreaders upstairs. I took the page back home that night and cut-and-pasted-in a new handlettered logo right onto the original. Logos are difficult, often requiring almost as much time as a page itself. Sometimes you have to convert them to vector files when they are being used a thousand times at different sizes, but not here. Photoshopping in a corrected logo didn't even occur to me-- the more I've been at this, the more agressively analogue and lo-fi my cartooning sensibilities are becoming. As I find myself spending more time interfacing with computers because of work, I find myself practically craving the hand-made object and image which is a drawing. I do make an exception for digital coloring though, as it is a triumph of speed and edit-ability to have an UNDO function in the uper left-hand corner. It is that and certainly not a love of the pixel. We've always valued painters but in this day and age, an artist who can expertly mix colors on a palette and apply them with skill and conviction becomes a kind of alchemist of mystery, an image-wizard of rainbow-strangeness. As for the Knossos tableau, I wanted it in some way to suggest the claustrophobic atmosphere of a 1953 painting by a Canadian schizophreniac/artist named William Kurelek, called THE MAZE: 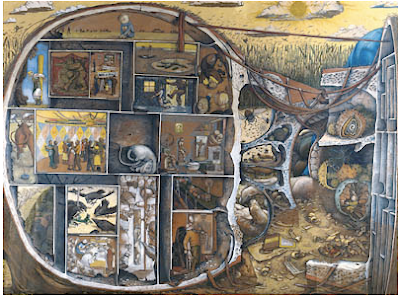