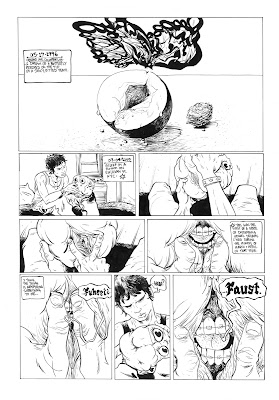 Rick Veitch. I've known him a long time but I haven't seen him for years. I got a chance to reconnect with him not long ago, and it was really great to see his infectous smile. We talked about his infamous RAREBIT FIENDS dream comics. I told him after re-reading all of his work I was inspired to start a series of Rarebits of my own on, a couple of which will be in PULPHOPE.

As far as I know, it was Windsor McCay, that titan of both comics and animation (having almost arguably invented both), who invented the Rarebit. He was dreaming in comics long before any of us were even born. But having invented the idea of telegraphing dreams into comics is about the same as having invented the triolet. The dream comic is a mode rather than a genre. 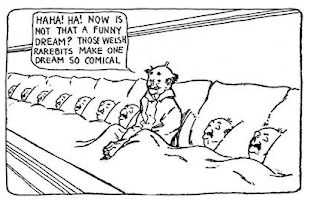 Apparently, a "Welsh Rarebit" is cheese on toast (with or without mushrooms), the idea being if you eat one before going to sleep you'll have nightmares.
Posted by pulphope at 12/07/2006 01:19:00 PM