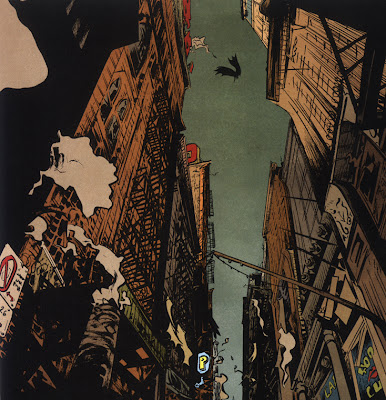 While I was still working on the first 50 or so pages of Batman Year 100, I lived down in Chinatown and had a separate studio where I would work. Sometimes I'd work during the day, sometimes at night, depending on what it was I had to do. I'd prefer to go in around 7pm and stay all night since it was the quietest time, walking home in the early morning hours along Grand Street just as the garbage trucks were starting up their routes, just before dawn.

There's a school down there, and when the winter weather was rough, a big wet flag on top of the roof would whip and unravel furiously in the howling wind, an eerie, lonely sound. It reminded me of a line in Frank Miller's afterward to Batman Year One, describing an impressionistic vision of Gotham's urban legend:

"A shadow fell across me, from above. Wings flapped, close by and almost silent..."

Every night I'd hear that flag in the wind, without thinking about it, I'd also be thinking about that line of Frank's. "Wings flapped..." Those words were so evocative to me.

Those two things unconsciously informed this pannel from the opening scenes of Batman Year 100, but it wasn't until later when I re-read Batman Year One that I remembered the association between the sound and the words.

There are many references to Batman Year One and to The Dark Knight Returns in Year 100, not to mention many other Batman stories, and I don't see how it could've been any other way. At the time, however, I thought of this image as a conscious attempt at capturing the spirit of the classic cover to Detective Comics #27 featuring Batman's first appearance in print, 1938.