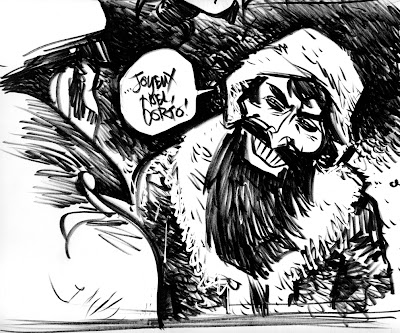 For weeks now, Frank Sinatra has been stuck in a piped-in tapeloop, dreaming of his White Christmases while Burle Ives, complete with backup singers, dreams of his own. Bing Crosby and Barry Mannilow, doomed to endlessly rolling up snowmen with their nameless dates like a pair of seasonal Sisyphuses, face an eternity of telling imaginary Parson Browns no, sir, we aren't married, and together dream of a time later on when they can retire to conspire by their own individual fires.

Elsewhere, almost completely unobserved, Rasputin, dressed like the veritable scarecrow-cossack-king he is, furcapped and cloaked, glides across a wind-ravaged Siberrian icescape bearing a half-frozen fish and a half-drunk bottle of vodka. He emerges from behind a wall of snow-haze and approaches the shivering figures of Corto Maltese and Shanghai-Li.

Who can say what dreams invade Rasputin's strange mind? He majestically staggers off his wooden sledge alongside a harnessed flank of twelve belled reindeer, lurching toward the couple with his arms opened wide. He takes a momentary pause to slug another unceremonious pull from the bottle then tosses the fish toward Corto and offers the vodka around with a magnanimous bow.