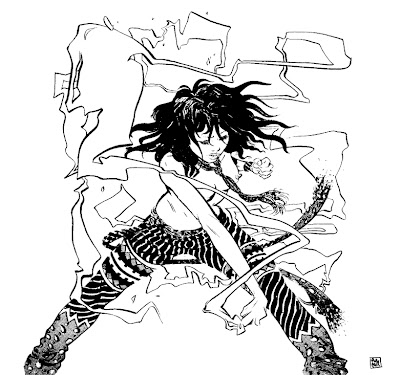 This fall, the Italian clothing company Diesel asked me to create a piece of art which would be a suprise birthday present for the company's owner and founder, Renzo Rosso. Renzo turned 51 on Sept. 13th (twelve days before my own) and I had just done a big store installation for them for their fall fashion week campaign. I suggested rather than have me to do a single drawing for Renzo which he would hang on a wall someplace, we could instead do a nice screenprint edition using one of their new CHELSEA HOTEL designs and make it available to other people as well, and that's what we did. The work was challenging and for a couple weeks, it was literally 24/7 all-Diesel-all-the-time. The drawing above is one of the designs I did for the screenprint, working out how to interpret the patterns on a particular pair of wool stretchpants from the line which I liked a lot. Diesel was totally open to having me do whatever I wanted, so long as it was sexy and rock'n'roll. The final print uses a black denim catsut from the line, which I thought was more in the vein of what they were looking for-- something kind of trashy-glam with a science-fiction atmosphere.

Renzo's birthday party was held in New York, and it coincided with their big fashion week party, one of those slightly absurd(ist) parties with the shitty velvet rope treatment, plucked-eyebrow culture vultures, hangers-on, various 8 ft. tall super models and other b-list celebrity types, freeflowing top-rung booze, popping flash bulbs, and go-go dancers on platforms. The scene was like something out of a Fellini film from the '70s. The party was held at a big private club in midtown, a huge place with stone columns and a non-descript, bank-like edifice. James Brown was the suprise musical guest. He and his 8 piece band rolled in around midnight through a secret entrance in the back and they proceded to run through a perfunctory cattle call of greatest hits, bam-bam-bam, totally professional and succinct. People danced and everybody had a good time.

There was an afterparty later at a downtown bar. A friend of mine was there and asked The Godfather (who insists on be called "Mister Brown") (you'll be reminded of this by his flank of 12 ft. tall bodyguards if you ever get the chance to meet him) if there were any new bands he was into.