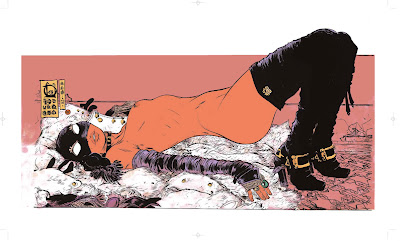 Since mid-2004, I have been working on a series of drawings based loosely on Napoleon Bonaparte. The idea of "Napoleon" is very vague but evocative, and can be stretched in a million different ways. I began this series while working on the Batman book, as a diversion from what was proving to be a very challenging project. The Napoleons have gone on to become an extended graphic exploration of different aspects of poster making, of discovering new ways of combining dynamic images and dynamic typographics. This one began life as a freeform erotic drawing and gradually worked itself into a proper "Napoleon".

When I went to Europe this year to promote BATMAN YEAR 100, I had the opportunity to do a new seriagraph for the French market, and I thought the time was right for a "Napoleon". It was the first time I worked on digital separations for a hand-pulled screenprint, which was something I was pretty nervous about. It was a reluctant necessity in this case, considering the printer was in Brussels, the publisher in France, I was in New York, and we had less than a week to get the print set-up, finished, dried, and shipped to Paris. A fresh seriagraph smells like rubbing alchohol because of the thinners used in the inks and it's always a bit of a gamble knowing how exactly the colors will work together as a final piece. Trial and error.

I'm not sure who she is yet but her name is, of course, "Napoleon" and she has since become a super-villian in the new book I am working on for French publisher Dargaud, called LA CHICA BIONICA.