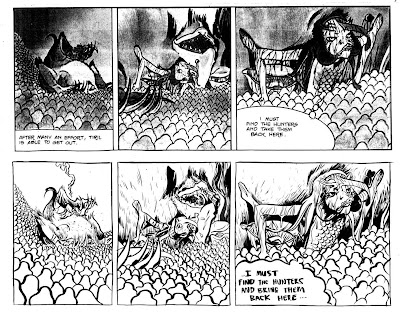 Cadello was working for Kodansha during the same time I was over there. At the Kodansha offices in Tokyo I saw an entire graphic novel he had done for them-- at least 200 pages of original story and art, board after board of crisp black and white drawings, gorgeous and weird and exciting. Sometimes before or after meetings I would sit with this story and just look at it. I surreptitiously xeroxed a bunch of his pages and smuggled them back here and still look at them from time to time.

He was another artist Kodansha contracted to create original material for the Japanese market, and to my knowledge the work he did over there has never been published either.
Posted by pulphope at 12/10/2006 02:03:00 PM