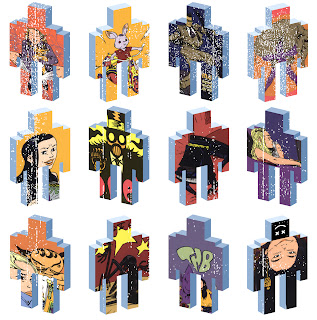 A short documentary film of LVHRD's innaugral BI-FOLD event, featuring a "team-up" between myself and musician/songwriter Mark Denardo can be seen here. If you look carefully you can see one of my kid drawings of Batman. The film (number 42 in the series) appears on a new dvd release called COOL HUNTING, a collection of 50 short films done by New York based filmmaking team, M SS NG P ECES. The Cool Hunting series chronicles modern day developments in technology, design, fashion and even flora. The Bi-Fold event (the first of many, sponsored by The Happy Corp Global) was held June 2006 at the Film Archive in nyc. You can learn more about The Happy Corp and LVHRD here.
Posted by pulphope at 12/06/2006 02:25:00 PM