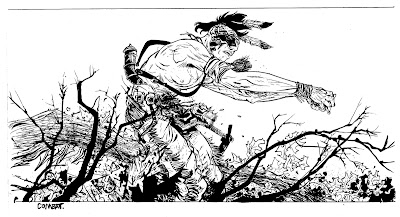 Above is a line art study of a watercolor by Hugo Pratt, called COMBAT. The world of Pratt's Indians looks very much like the world I lived in growing up in northern Ohio. Tecumseh's last stand (The Battle of Fallen Timbers, 1794) and the ancient astronomical Serpent Mound are both right there.

While in Spain over the summer, I picked up two copies of a beautiful book called PERIPLO IMMAGINARIO, a massive retrospective of drawings and paintings by Hugo Pratt, published by Lizard Edizioni. This huge book serves as a multi-lingual catalogue for a travelling exhibit of Pratt's work, and goes well beyond the familiar images of the sea-wandering Corto Maltese series. One copy alone is as heavy as a slate floor tile, carrying two was like carrying pancaked bowling balls. The day I bought these books I sat on a beach of the Mediterranean and drank red wine and looked at the lines on the palm of my drawing hand. I wondered--without really wanting to know-- which of the lines on my palm was my fate line. According to the legend of Corto Maltese, he had a gypsy read his palm, only to discover he had no fate line at all. Alarmed by this, Corto (whose name means "cut" in Italian or "short" in Spanish) slashes a line into his palm using his dead father's shaving razor. He then runs away from home to take up a life at sea, like his father before him. Strangely, this significant, formative event in the life of Corto Maltese is one Pratt never actually depicted in the stories. Neither did Pratt show us the death of Corto Maltese. Like Mifune's wandering ronin and Eastwood's cowboy drifters, Pratt's alter ego's fate is to float suspended in a self-contained world of fiction-time, beyond the reach of death.
Posted by pulphope at 12/09/2006 10:40:00 AM