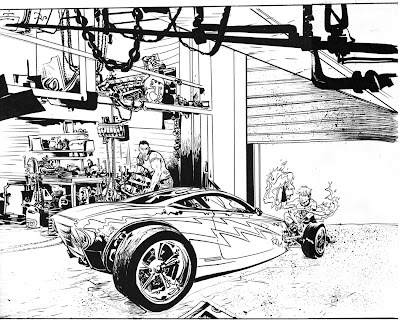 A pannel from my teenage Human Torch vs. teenage Spider-Man story, appearing in the anniversary issue of The Fantastic Four. Here Johnny and his pal Wyatt Wingfoot tool-up Johnny's race car. I always loved those crazy machines Kirby would invent for his stories-- the Forever People had their Super-Cycle, Orion had that...whatever that thing was... and The Fantastic Four had their Fantasti-Car. Kirby's idea of a car was like someone taking one of those saucer-cupped seats from the sit-and-spin Mad Hatter ride at Disney World, re-casting it in shining steel, painting lightning bolts on the sides, and sticking giant tires, chrome pipes, and a massive jet-engine beneath the frame.

A couple of years ago, some friends and I had the good fortune to visit the M.I.T. Media Lab, which is where geniuses build the kinds of machines geniuses build when they are left alone and have proper budgets to finance their ideas. We saw experimental robots and lazers and musical instruments and computers for the blind and some other things too weird to explain without diagrams. The nanotech wing was financed by the military, and it was the only area which was off-limits, but the rest was open to us. The Media Lab is the real Baxter Building, that celebrated skyscraper where Mister Fantastic dreams up his fantastic machines in the mythical Marvel Comics universe.

In the Media Lab's automotive wing, we saw incredible designs for cars-of-the-future which were heart-breakingly far-out, strange and beautiful. They were like the kinds of things Kirby would've designed if he were born as an industrial engineer instead of a cartoonist. These were all crazy, incredible vehicles, ergonomically designed machines built around the shape of a person's reclining body in repose-- cars like sleek metal cocoons on wheels. There were other designs for cars which could fold up like lawn chairs. Still other had rounded "bubble" forms, electric engines, and a variety of three, four, or five wheeled designs built on frames which could spin freely in three-sixty rotations, making parallel parking and taking corners a breeze. There were even some which could fly. The variations went on and on, each one different and new, each one a thrill to see, each one a kind of marvellous Fantasti-Car all its own.
Posted by pulphope at 1/04/2007 01:56:00 AM