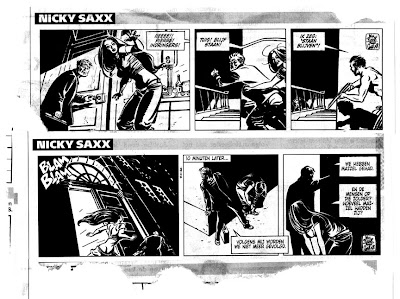 One of the nicest suprises I discovered in Amsterdam recently is a daily Dutch cartoon strip called "Nicky Saxx", written by Willem Ritstier, and illustrated by Minck Oosterveer. This strip appears daily in De Telegraaf, Holland's largest newspaper, something like a cross between USA Today (splashy color covers, large sports/entertainment section with a lean toward the lurid) and the New York Times (world events/business news/editorials). I kept tearsheets of the Saxx strip for the days I was there, and regretted that I couldn't find it on weekends.

De Telegraaf runs their cartoon strips in a rather large format in the first folio-- about 7 inches wide, which is notably large by most American daily cartoon standards. Most of the Dutch dailies are woefully mediocre, featuring the usual laconic, big bagette-footed blobs with half-lidded eyes, all of them "C" level graduates of the lazy post-Garfield school of cartoon humor. Garfield itself can be found there too, as a matter of fact, like some undying dead horse of a joke. I have to admit, I'll never understand the ongoing European popular fascination with Garfield. If you ever do a book signing in Europe involving children, you'll invariably wind up drawing Garfield and/or the slobbering dog. Montezuma has his revenge, and I guess Jim Davis does too. He must be out on the course right now, swinging his nine irons, laughing and laughing.

Ritstier and Oosterveer's sexy, leggy adventurer Nicky Saxx stands out amongst her daily running mates, towers over them infact. While the others are looking into empty dog dishes and blandly warbling to other bagette-footed blobs, Nicky Saxx is dodging bullets, jumping between moving motorcycles, wrestling sharks, piloting yachts and sipping dry champagne. A true adventure strip in the Modesty Blaise/Cap'n Easy tradition, I can't believe I've never heard of her before. In Oosterveer's work, there is a sense of the characteristically tight inking we see in other Dutch cartoonists, such as Joost Swarte and Dick Mategna, yet the subtle abandon in Oosterveer's brush gives his drawings a slightly more international feel. His art is like a suprising blend of the Italian cartoonist Magnus (whom Americans will remember for the erotic strip Necron), and France's Jean-Claude Forrest (Barbarella). His panel compositions are excellent, the story is communicated briefly and with force. His work is brushy and a bit simple, perfectly suited for daily adventures.

Oosterveer writes of Nicky Saxx on his personal website:

"The Nicky Saxx strip has been running for some years now as a daily in Holland's largest-selling newspaper, "De Telegraaf". Nicky and her friend, Elsa Steiner, are globe-trotting adventurers with a taste for danger, hiring themselves out as troubleshooters and investigators of the paranormal via their organisation, Room 666, which is located in a disused lighthouse on the East Coast of America. Aided by computer expert and technical wizard, Ben Folds, the duo specialise in helping all those people the conventional law-enforcement bodies cannot assist."