A LION CUT IN HALF 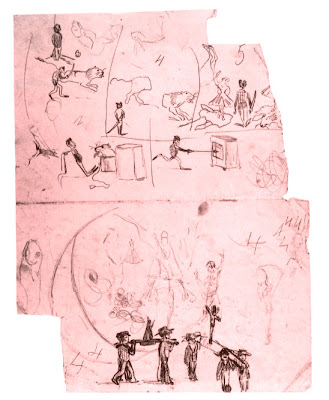 Pablo Picasso's preserved child drawings are now housed at the Musee Picasso in Barcelona, and are available for view upon appointment. Above is one he did in 1893 (aged 12), which we could arguably classify as yet another example of "proto-comics".

In this picture, as Natasha Staller points of in her book A SUM OF DESTRUCTIONS, the young Picasso made a series of sequential images-- his version of a then-popular comic-strip-like format known as an 'aleluya'. The drawing dramatizes the cutting in two of a lion's body, and demonstrates how the act of drawing could fragment and alter objects protrayed.

The bottom-half of the page features a scene depicting a religious procession, with 'imagenes' of a Christ and Virgin. Above this, in this seemingly-unreated sequence moving backwards, right to left, bottom to top-- a hero pulls open a drawer, only to be terrified by an enormous lion's head popping out of the second image. He retaliates in the third, by slicing the lion (as a bowler-hatted gent in the top area pisses obliviously into a corner). In the next sketch, the lion tumbles downward as it splits in two, the front and back halves apparently still alive. In the last, the formerly threatening lion's body parts are reduced to rugs-- to trophies-- upon which women dance, as the hero lords over the scene. Pablo numbered only two of the scenes, the last two of mastery and triumph, with a giant 5 over the hero's head. ('Aleluyas' --like comic strips-- themselves are divided: many parts, taken together, comprising a whole).