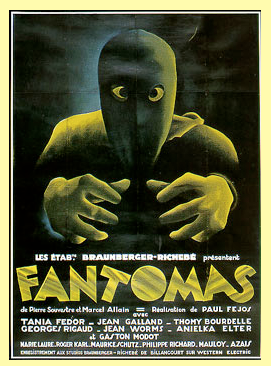 It has been demonstrated that the first properly costumed super-villains appeared in French pulp fiction. Decades before Lex Luthor, The Joker, Diabolik, Satanik, Catwoman, Fu Manchu, Doctor Mabuse and all the rest, there was Fantomas, arguably the first costumed super-criminal ever, who terrorized Paris in his monthly magazine appearances. Fantomas' stories were written by Marcel Allain and Pierre Souvestre, debuting February 1911 to immediate success. Fantomas was a gruesome figure who killed and maimed the good and bad alike. His goal was chaotic, destructive anarchism, and he bled malace with every act. He wasn't above committing petty terrors either-- in one peculiar episode, he places razor blades inside all the shoes in a department store, and puts acid inside the various perfume spray bottles. French film and fiction soon spawned a number of other colorful super-criminals along the same lines, including Belphagor and Irma Vep, eventually offerring a costumed hero called Judex (Latin for "the Judge"), the direct precedent to costumed crimefighters such as The Shadow and Batman.

Jean-Marc and Randy L'Officier have written an excellent book called The Shadowmen, a definative history of French pulp crime fiction, which I would recommend to anyone interested in the topic. 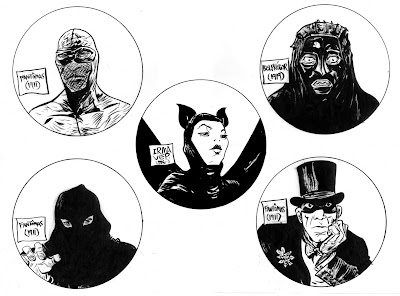